skip to main | skip to sidebar

Why People Choose to Live Where they Do 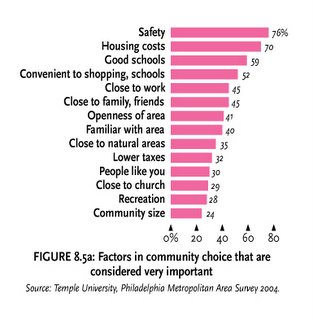 The Metropolitan Philadelphia Indicators Project (MPIP") surveyed 1,000 residents from the Philadelphia region to ask them what factors they considered when deciding where to live. Results from the 2004 survey are presented in this chart. For individuals (as opposed to businesses), it’s apparent that taxes are not a primary factor driving relocation decisions. Rather, safety, value of the housing dollar, and school quality are factors given the greatest weight. But maybe that's too simplified. Maybe individuals articulate their primary motivations for living in one place or another differently than businesses, but are essentially expressing the same concerns; people - like businesses - place a great importance on getting value for their money or retaining wealth. For individuals, considerations are broader - they want schools, safety, quality of life, etc. Businesses, while their constituent workers may value the things that individuals do, are more narrowly focused on profits and the bottom line. So, I wouldn't conclude that taxes aren't important to individuals, the concern about value just manifests itself differently than in businesses. In the end, the concerns of businesses and individuals meld together; we as a City need to think about ways to create incentives for both to stay in Philadelphia, whether it be through targeted tax reductions/reform or enhanced services. The MPIP is administered by Temple University.

I serve as a member of the MPIP Advisory Committee, and we worked hard to make sur that the graphic you discuss is interpreted correctly so let me caution you about drawing the conclusion you take from that graphic. As the MPIP report discusses:

"Consistent with last year’s report, lower taxes were not cited by this year’s respondents as one of the major reasons for their choice of community"

But drill deeper and you read:

What to make of all that?

Clearly, everything (schools, jobs, crime, weather, home style, etc.) matters. A lot of factors help determine location decisions for individuals, but for those who are looking at the bottom line, taxes really can -- and often do -- push people to actually make the move.

On the other hand,

Tax revenues are one way to directly address the issues that rank highest on the list.

My reaction is, assuming your analysis is correct, let that higher percentage that decide to move because their primary concern is taxes go ahead and move.

We'll take the rest of the folks who are more concerned about basic quality of life issues and are willing to fork over some extra bucks to get it.

Promote Your Page Too